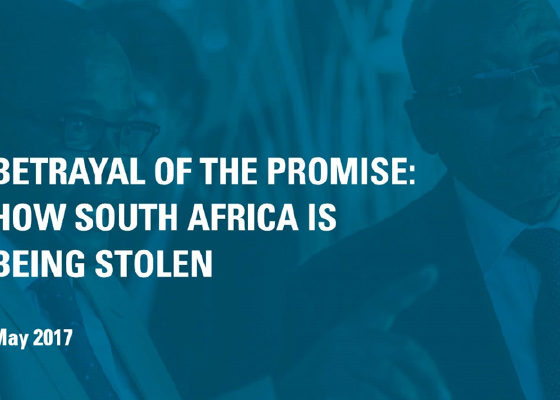 A SUMMARY OF THE STATE CAPACITY">

The State Capacity Research Project’s report on state capture aims to prove that state institutions are being repurposed to redirect rents intended for development into the control of a powerful elite that operates illegally. The Gupta family has been instrumental in this repurposing of state institutions. The authors of this report describe the relationship between the Guptas, President Zuma and the government as mutually beneficial, or symbiotic.

The Gupta family had already made stable bonds with Zuma and his family by the time Zuma was elected as president. Now, the Gupta family has complete control over the president and his decisions. The Guptas are also vastly useful to Zuma because of their ensured loyalty—they are dependent on him and not the ANC nor a business, and work as “brokers and fixers” who get things done for Zuma and his power elite. At the end of the day, the Guptas could be trusted to manage the “shadow state” transactions (in other words, transactions that must be made in a way in which people in the shadow state with formal roles in the constitutional state can either hide or deny them) and this made the Gupta family invaluable to Zuma. Zuma’s network is not made of criminals who have captured the state, but is an organized political project that has repurposed state institutions for the gain of the elite and at the cost of democracy, removing the ANC from its place as the primary force of transformation in society. According to the report, this makes South Africa’s current political situation a “silent coup.”

President Zuma and senior government officials have colluded with this shadow network of corrupt brokers, and this phenomenon is known as “state capture.” State institutions claim to allocate beneficial rents to support a group of citizens to overcome the disadvantages of the past. In other words, rents are intended to aid the poor racial minorities who have been disadvantaged by apartheid-era discriminatory policies and economics, and are necessary for development. However, the result of beneficial rents is competition to access those rents. This can happen legally and ethically, like when people lobby or create legal interventions to benefit certain deserving groups. Corrupt rent seeking occurs during state capture, in which state institutions are being repurposed and rents flow into the hands of the power elite through deceitful and corrupt processes.

These systemic and well-organized transactions, made by people with established relations and on an increasing scale, differentiate state capture from mere corruption. South Africa’s government is more than just “corrupt”; there is high-level political protection at play, like law enforcement agencies’ loyalty to the shadow state and a climate of fear, along with the elimination of competitors. To do this, the shadow state engages in repurposing state institutions, or reconfiguring the way that they are structured and managed so that they serve a purpose different from its formal mandate. This is done for the purpose of consolidating political power, not for the sole purpose of stealing money. The aim of the shadow state is to change the rules of the game, legitimize them, and select the players in order to redirect rents away from their intended targets into private hands.

The report describes the Zuma-centered power elite’s “political project” as the ways in which power is intentionally deployed to serve the power elite and are legitimized by the ideology of radical economic transformation, which is repeatedly articulated by a coalition of political interests. This is an abuse of power by Zuma, and enables strategies of corrupt rent-seeking practices and consolidation of power by an elite. The guise and empty promises of radical economic transformation, though, legitimates that abuse of power. The researchers of the report emphasize that the ANC must reclaim the ideology from the power elite, who have co-opted the term for their own greedy agenda and political project.

The Repurposing of State Institutions

Zuma’s appointment of Malusi Gigaba, the current Minster of Finance, as minister of Public Enterprises initiated the “repurposing of State-Owned Enterprises (SOEs) as vehicles for looting.” With this pivotal event came the possibility of taking over the National Treasury possible in order to centralize rent-seeking and reinforce the symbiosis between the constitutional state and the shadow state. Gigabi systematically restructured the SOE boards and then used the loophole in the Public Finance Management Act that allows the use of procurement procedures of SOEs to benefit selected contractors who had been sanctioned by the Gupta network.

The March 2017 Cabinet reshuffle was the first Cabinet reshuffle that took place without the full support of the governing party. It not only enabled final control of the National Treasury but also served as confirmation of the silent coup. The report calls this mode of governance a form of counter-development, incapable of driving genuine development programmes. Since the Cabinet reshuffle, there has been an increase in confidence of the capability of the Gupta network on SOE boards and in senior management. The shadow state saps vitality from the constitutional state, leaving state institutions without the capacity to execute their formal responsibilities.

The repurposing of state institutions has enabled Zuma to govern via a set of “kitchen cabinets,” selected groups of people from different networks, but all tied to the shadow network. These groups are small and informal, convening only as-needed. When Zuma deems it necessary, they have been drawn from state security establishments, Gupta networks, SOEs, Cabinet ministers, and more.

The controlling and elimination of the state’s investigative capabilities is a large part of state capture. Zuma has systematically removed credible figures in the security establishment. For example, the politicization of the Hawks ensures that cases of corruption are not investigated and Zuma’s shadow network is not held accountable for its systematic dismantling of democracy and constitutional law. Further, the shadow network is able to avoid old and new restrictions, like the Financial Intelligence Centre Act, because of the weak nature of South African law enforcement agencies. Even though the Guptas’ bank accounts have been closed, they will continue to control Zuma through their associates’ buying of the Habib Bank. The researchers of this report urge regulators to prevent these financial mechanisms used by the shadow state.

The ultimate, capital-intensive, “big and shiny” project that would benefit the rent-seeking shadow state is the nuclear deal. The Guptas have already purchased their uranium mine because they assume that the nuclear deal will be done, and there is evidence of the influence of Russian intelligence in Zuma’s decision-making process. This would be central to the formation of a new framework for radical economic transformation, and would confirm Zuma’s rent-seeking system as the ultimate bridge between the constitutional and shadow states. What is needed is investment into development programmes, but Zuma will continue to invest in these capital-intensive projects unless the banking sector and the Reserve Bank work to expose and shut down the shadow state.

The powerful elite’s pursuit of its own interests at the expense of South African democracy, especially the poor who will suffer first and the most, is in reality a de facto silent coup. Researchers say that evidence points toward institutional decay and Zuma as a grave security threat to constitutional democracy and economic security of South Africans. Laws and the Executive Ethics Act are ignored, and there are clear conflicts of interest within the power elite. Efforts must be focused on protecting the information technology systems of the Independent Electoral Commission in order to stop them from being taken over by a company linked to the shadow network. Otherwise, the ANC elections in December and the General Elections in 2019 will not be free nor fair.

Victoria Wang, is a Junior at Duke University interning at the Women’s Legal Centre. She is studying Public Policy and Global Health, and is from Illinois.