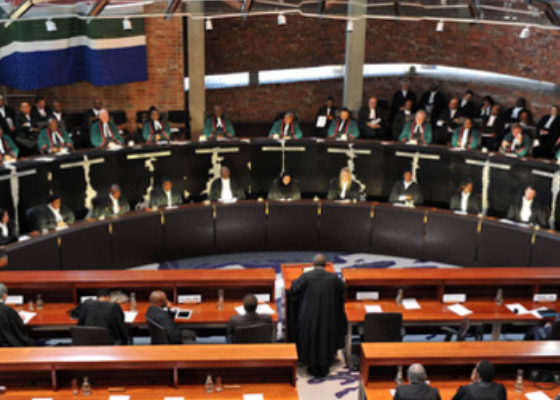 Will women in customary marriages have equal right to property">

Will women in customary marriages have equal right to property

On Tuesday 16 May 2017, the Constitutional Court reserved judgment in confirming the Limpopo High Court’s decision in the matter of Ramuhovhi and Another v The President of the Republic of South Africa under case number CCT194/14. This case concerns the validity of section 7(1) of the Recognition of Customary Marriages Act 120 of 1998 (RCMA). Section 7(1) of the RCMA regulates the proprietary consequences of polygynous marriages entered before the Act came into force on 15 November 2000.

The High Court Acting Judge Laminga declared that section 7(1) of the Recognition Act discriminates against women in old polygynous marriages based on gender, race and ethnic or social origin and is therefore inconsistent with the Constitution.  The High Court ordered that until parliament enacts legislation to remedy the unconstitutionality, and that the wives who are parties to such marriages shall have joint and equal rights of management and control over and in the marital property to their husbands, and these rights shall be exercised as follows:

The court held further that the declaration of invalidity shall not affect:

The court held further that any interested person may approach the court for a variation of the Order in the event of serious administrative or practical difficulties being experienced.

The court also heard an application to intervene by the Legal Resources Centre who is representing Mrs Thokozani Maphumulo. She is at risk of losing her marital home where she has been living for the past 25 years because she was not recognised as the beneficiary of her husband’s deceased estate where she was his wife in a polygynous marriage before the RCMA.  They argued that the right to housing was at stake where a deceased had not been wound up. The Legal resources Centre argued that their client should not be excluded from retrospective effect of the order and that it should be qualified to include deceased estates that had not been wound up and where the widow is at risk of not having a place to live.

The Women’s Legal Centre (WLC) represented the Women’s Legal Centre Trust (Trust) and intervened as amicus curiae to broadly support the application for confirmation on the basis that section 7(1) discriminates against women in pre-Recognition Act customary marriage; and had no objection to the intervention application, seeking to argue for the broader class of a very vulnerable group of women in polygynous marriages in terms of the challenges they face with race, gender and age.

The Constitutional Court heard arguments by the parties regarding the right of ownership by women in customary marriages with a focus on the right to housing, the issue of retrospectivity with the need to objectively not only look at the fact of the case before the court but also the broader class of extremely vulnerable women the judgement will impact on and the need to consider what is just and equitable. The court’s attention was also directed to the delay in passing legislation to address the challenges that the courts have been faced with regarding customary law marriages to ensure that a very vulnerable group of women are not discriminated against. It was also noted that the judgement must be widely publicised so that the vulnerable group pf women are aware of the rights that that are conferred upon them so that it can be duly exercised.

There are thousands of vulnerable women in South Africa living in polygynous marriages who suffer the hardship of the non-recognition of their property rights because of the rules of customary law.  This means that because they do not have equal control over property within their marriages, they are vulnerable to eviction, homelessness and destitution.  They may also be left to care for children and remain in a position where finding employment or an alternative home is difficult for them.  This is particularly harsh for older women, further disadvantaged by the restrictions apartheid placed on their education and freedom of movement.  The Women’s Legal Centre (WLC) seeks to achieve equality for all women—particularly black women through impact based litigation and advocacy.

The WLC has won several precedent-setting cases that have improved women’s access to justice in South Africa. The judgment handed down by the High Court in the Ramuhovhi case—hailed as a victory for women’s rights—will surely take its place amongst these ground-breaking cases.  It moves women’s rights one step closer to “equal rights for all” before the law.

We wait in anticipation for the Constitutional Court to confirm that section 7(1) of the RCMA to be unconstitutional and invalid regarding polygynous marriages and the appropriate remedies.

About the Women’s Legal Centre

The WLC is a non-profit, independently funded law centre, started by a group of lawyers in Cape Town in 1999, with a vision to achieve equality for women in South Africa. The centre has identified five strategic focus areas. These are: violence against women; fair access to resources in relationships; access to land/housing; access to fair labour practices; and access to health care (particularly reproductive health care).

The WLC has been at the forefront of legal reform in relation to women’s equality in South Africa since the Constitution came into effect, having won several precedent setting cases in the past.

To empower women through knowledge of their rights, the Centre also offers free legal advice to women. Women are assisted or referred to the relevant body, NGO or court for assistance.

For more information or to arrange an interview, please contact Angie Richardson on 083 397 2512 or angie@thepressoffice.net