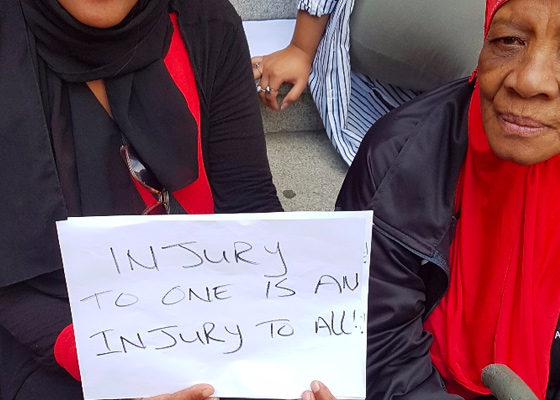 As we celebrate Human Rights Day on 21 March we must remember that some 16 years after the Constitution came into force, legal recognition has still not been afforded to Muslim marriages. This results in widespread oppression and gender discrimination in areas such as divorce, the duties of support, parental rights and responsibilities and inheritance.

By Seehaam Samaai Director of the Women’s Legal Centre

In South Africa, great emphasis is placed on the right to equality because of the many years of suppression and gross violations of human rights under apartheid rule. This right is recorded in the preamble of the South African Constitution indicating its importance and the Constitution serves as the legitimate legal instrument on the enshrinement of the rights of all individuals in the country.

As we celebrate Human Rights Day on 21 March we must remember that some 16 years after the Constitution came into force, legal recognition has still not been afforded to Muslim marriages. This results in widespread oppression and gender discrimination in areas such as divorce, the duties of support, parental rights and responsibilities and inheritance. It is not uncommon for Muslim women to be left destitute and without any legal recourse because of their legal status.

The Constitution makes provision for legislation recognising marriages concluded under any tradition or a system of religious, personal or family law. In 1999, the South African Law Commission was instructed to investigate the issues surrounding Islamic marriage and related matters.

Despite an extensive public consultation process ending on May 31, 2011, the Muslim Marriages Bill is still at the centre of a heated debate between various sectors within the Muslim community. The main source of contention is whether Islamic law (Shariah) has been correctly interpreted by the drafters of the Bill. Members of the community are split on what to do: engage parliament on a redrafting of the Bill or renounce it in its entirety.

The issues surrounding the Muslim Marriages Bill are extremely complex. The attempt to align Islamic law with the Constitution may be irreconcilable. Be that as it may, legislation is urgently required to enforce the rights of Muslim women and address the inequalities and unfair discrimination —the promulgation of a detailed and technical Act may not be the way forward because the legislation entails the delicate balancing of Islamic law with several Constitutional rights.

The Women’s Legal Centre is taking the South African government to court for failing to pass legislation that will give recognition to Muslim marriages. When civil or customary marriages break down, the law steps in to ensure that there is fairness between the spouses and to protect the rights of children. This is not the case in respect of Muslim marriages or other religious marriages.

We believe that the non-recognition of Muslim marriages is tantamount to an ongoing violation of the human rights of women in such marriages. Currently we utilise strategic or impact litigation to create precedents to expose institutionalised injustice and change social attitudes while empowering vulnerable groups and holding the government accountable.

The Muslim community remains markedly patriarchal making it more difficult for women than men to make a living, acquire property and support their children. It is also often the case that women are prevented from obtaining an education or pursuing a career. In the absence of legal recognition of their marriages these women are often left with no access to property, money, or resources in the event of divorce.

This socio-economic vulnerability is compounded by the unavailability of legal enforcement mechanisms that Muslim women can utilise to assert their rights. Thus, women are forced to turn to religious and cultural tribunals or decision making bodies which are largely, if not exclusively controlled by men who enforce Muslim personal law in a manner which is skewed in favour of husbands.

It is also extremely difficult for Muslim wives to secure a divorce, whereas their husbands can do so without any hardships, relatively informally and without any just reason. The result is that women facing pervasive domestic violence can be trapped in marriages with abusive husbands when the clergy refuse to grant them divorces.

Many women are not aware that by concluding a Muslim marriage they do not have the same rights as spouses in a civil marriage or a marriage in terms of African customary law, both of which are regulated in terms of South African law. Due to the patriarchal nature of the Muslim community in South Africa, women who seek to enter a civil marriage in addition to their religious marriage can be prevented from doing so by husbands who refuse to have marriages registered civilly.

Due to the failure of the national executive and the legislature to take the necessary steps to provide for legal recognition of Muslim marriages, in some cases women have turned to the courts for redress. In several cases, the courts have held that by not recognizing Muslim marriages as legally valid, the State conduct amounts to a violation of women’s’ constitutional rights. Through judicial intervention the courts have declared women to be “spouses” for the purposes of inheritance, interim maintenance, and loss of support claims. While this provides a piecemeal form of redress, litigation is a time consuming and very expensive process.

However, most women cannot afford legal representation in the High Court and are therefore excluded from being able to access legal remedies.

Thus, we firmly believe as a feminist organisation the non-recognition of Muslim marriages is inconsistent with fundamental rights, equality, human dignity, freedom of religion, belief and opinion; the rights of children, language, cultural, religious and linguistic communities; access to courts and the diligent performance of constitutional obligations.