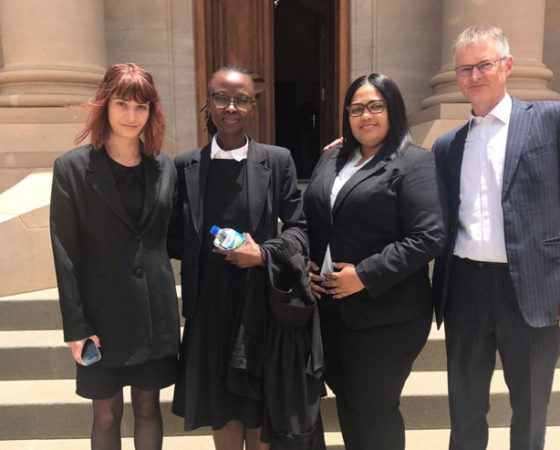 The Women’s Legal Centre welcomes the judgment handed down by the Supreme Court of Appeal on Wednesday 13 December 2017.

The judgment concerned the mother of a child who had attended Fish Hoek High School since 2011. Ms S submitted her first application for a fee exemption in that same year. The form required, inter alia, that the combined annual gross income of the child’s parents be provided. Ms S felt that she had a right to apply for the fee exemption as an individual, separate from her ex-husband – this was as a result of the breakdown in relationship between herself and the child’s father, the difficulties that she had experienced in obtaining the information required from her ex-husband and her right to be considered relative to her personal circumstance (as a divorced custodial parent).[1] Following a lengthy dispute between Ms S and the school (as well as two appeals to the Western Cape Education Department’s Head of Department – one of which was successful), which spanned three years and culminated in Ms S (represented by Equal Education Law Centre) applying to the Western Cape Division of the High Court for relief, the High Court found in favour of Ms S.[2]

The Women’s Legal Centre has, as one of its core objectives, the development of law, policy, and feminist jurisprudence based on an intersectional approach with substantive equality as its foundation. One of our aims is to drive a feminist agenda that appreciates the impact that discrimination has on women within their different classes, race, ethnicity, sexual orientation, gender identity and disability.

Bearing this in mind, the WLC entered the matter as an amicus curiae (friend of the court) in both the High Court and the Supreme Court of Appeal.  We sought to bring a gendered perspective to the arguments before the Court by submitting that the fee exemption scheme has an adverse impact on women in a similar position to that of Ms S. We were able to place before the Court our understanding of the ‘multiple and intersecting forms of discrimination’ that women face. The Centre sought to bring the Court’s attention to the plight of women who are often the custodial parents and therefore, inter alia, ‘ordinarily bear more responsibility for child-rearing than fathers, that the failure by fathers to shoulder their fair share of the financial and social burden of child rearing results in mothers bearing the financial responsibility for childcare disproportionately, the insufficiencies in the maintenance system compound the already disproportionate economic burden on mothers, and high levels of domestic violence affect mothers’ ability to communicate with and enforce fathers’ obligations to their children.’ The Centre submitted that ‘the fee exemption scheme indirectly discriminates against women on the grounds of their sex and/or gender, and violates their right to dignity by effectively excluding them from obtaining fee exemptions in the absence of the non-custodian parent’s financial information.’ In addition, we submitted that the fee exemption scheme was inconsistent with South Africa’s international obligations in terms of the Convention on the Elimination of All Forms of Discrimination Against Women.[3] These submissions were accepted by both Courts in reaching their decisions.

The SCA’s judgment has acknowledged the difficulties experienced by women in attempting to bear the financial and social responsibility of child rearing, at times without the support of the non-custodial parent. The Court found in favour of protecting Ms S (and other parents in a similar position) by finding that ‘non-custodian parents should not escape their legitimate responsibility for paying school fees, and that an exemption may be granted to, amongst others, a parent who…supplies information indicating his or her inability to pay school fees owing to personal circumstances beyond his or her control. ’[4] This means that women who are the custodial parent of a child/children, and are unable to engage with the father of their child/children in an effort to obtain their details for the purposes of applying for an exemption may still apply for such an exemption. In addition, these women and the child’s father will be jointly and severally liable for the remainder of the fees, meaning that schools are able to pursue both parents for the purposes of obtaining the school fees due to them (minus the exemption).

The Women’s Legal Centre would like to acknowledge Equal Education Law Centre for their determined efforts in pursuing a just outcome for Ms S. We would also like to sincerely thank Legal Aid South Africa for their support and commitment to the work of the Centre, and their financial contribution which allowed us to pursue the advancement of women’s rights in this matter.