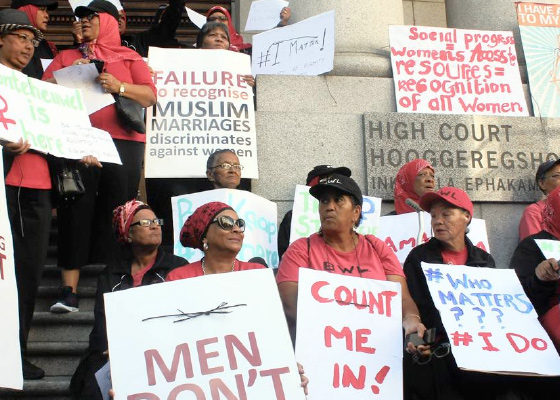 Today Monday 20 March 2017, the day before Human Rights Day, a new date was agreed by the parties in the recognition of Muslim marriages class action to be heard by the High Court. The 28th August has been agreed.

A directions hearing was convened by the High Court this morning after the Judge President ordered the consolidation of a further matter pending before the High Court which similarly highlights the plight of Muslim women.

There are several matters that are pending at several courts across the country. This is testament to the fact that Muslim women are struggling to assert their rights because their Muslim marriages and the consequences arising therefrom are not legally recognised. They have no option but to plead their cases with the courts and the judiciary.

Given the importance of the matter three judges have now been appointed to hear the matter. Namely; Judges S Desai, G Salie-Hlophe and NP Boqwana.

This morning saw women come to the steps of the High Court from all over Cape Town to show solidarity and support for this matter. The lived reality of these women is that legal protection has been denied to them some 16 years after the Constitution came into force. This results in widespread oppression and gender discrimination in areas such as divorce, the duties of support, parental rights and responsibilities and inheritance.

For more information or to arrange an interview, please contact Angie Richardson on 083 397 2512 or angie@thepressoffice.net